Aims: Our exploration work has uncovered the different anti-toxin/metal tolerance and patterns against the heavy metal resistant coliform microscopic organisms from the aquatic waste of the hospital. It might give new routes for the treatment of irresistible ailments particularly by coliform and critical for hazard evaluation as well as hazard management associated with the effluents of the hospital.

Background: The higher use of pharmaceuticals, Radionuclides, and other antimicrobial solvents are the major source of metals in hospital wastewater. The hospital aquatic environment has a high content of both organic and inorganic matter with living organisms. Bacteria can resist an antimicrobial agent by producing extracellular enzymes that eliminate antibiotics and metal toxicity. In this study, we covered the existing patent literature in this area. New patents in the areas of topically applied antibiotics and agents that can potentiate the achievement of existing antibiotics may extend their helpful lifetime.

Methods: Samples were collected from three different Departments of King George Medical University, Lucknow during the month of December to May (2015-16). Isolation and metal tolerance of coliform isolates were done on metal amended plates. The antibiotic sensitivity test was done by disc diffusion method. The plasmid DNA of bacterial isolates was done by the alkaline lysis method. The conjugation study was also performed in wastewater as well as a nutrient medium.

Conclusion: The finding of this study presents a potential health problem as the predominant coliform species have increasingly been associated with outbreaks of hospital infections. It is recommended that hospital waste must be properly treated before its release into the environment. 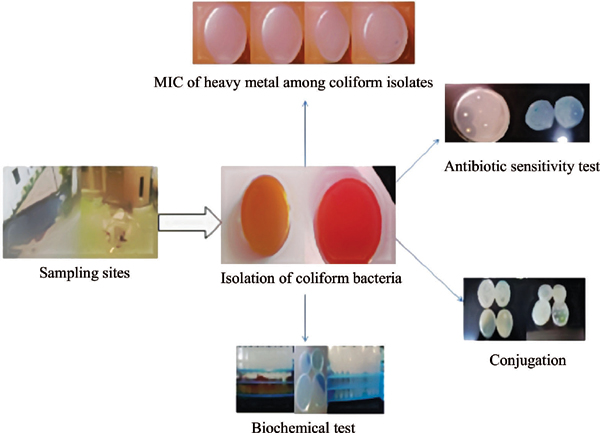