Background: Protein misfolding is a critical factor in the progression of a large number of neurodegenerative diseases. The incorrectly folded protein is prone to aggregation, leading to aberrant interaction with other cellular proteins, elevated oxidative stress, impaired cellular machinery, finally resulting in cell death. Due to its monogenic origin, Huntington’s disease (HD) is a poster child of protein misfolding neurodegenerative disorders. The presence of neuronal inclusions of mutant huntingtin N-terminal fragments, mainly in the cortex and striatum, is a neuropathological hallmark of HD. Inhibition of protein misfolding and aggregation has been attempted using a variety of conventional protein stabilizers.

Results: Tools such as RNA interference (RNAi) and antisense oligonucleotides (ASOs) are potential therapeutic agents which target the post-transcriptional step, accelerating mRNA degradation and inhibiting the production of the mutant protein. These nucleic acid sequences not only target the elongated CAG triplet repeat translating to an expanded polyglutamine tract in the mutant protein, but have also been used to target single nucleotide polymorphisms associated with the mutant allele. The therapeutic sequences have been investigated in a number of cells and animal models of HD. One antisense sequence, with desirable safety properties, has recently shown downregulation of huntingtin protein in a limited clinical trial. RNA aptamers have also shown promising results in inhibiting protein aggregation in a yeast model of HD. Novel drug delivery techniques have been employed to overcome the blood brain barrier for the use of these therapeutic sequences.

Conclusion: The selectivity and specificity imparted by nucleic acids, along with novel delivery techniques, make them hopeful candidates for the development of a curative strategy for HD. 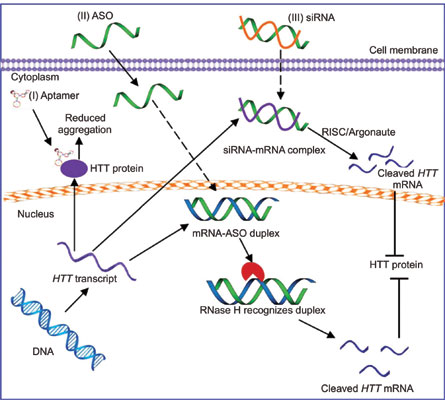